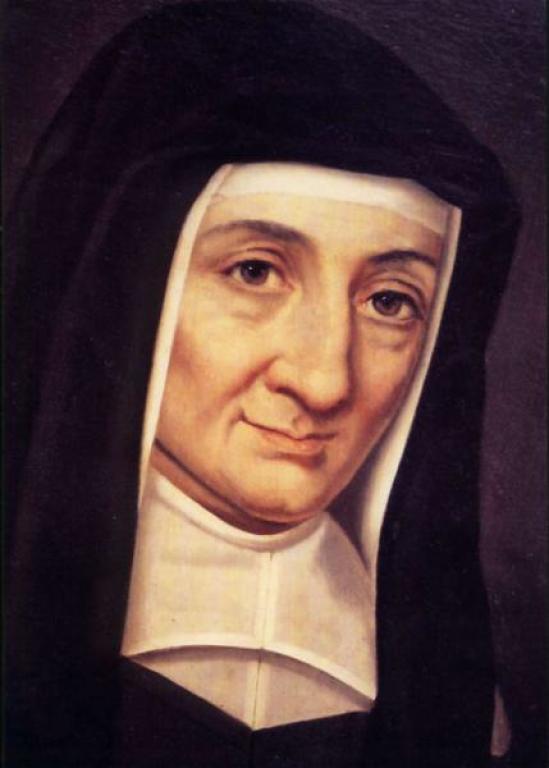 Wife, mother, foundress, saint - such was the course through life and into eternity of the woman named Louise de Marillac. She was a woman of courage, interested in the great moral and social problems of her day, and a woman for whose step the poor and hungry of Paris streets listened as she went about serving their needs. Nurse, educator, and social worker was St. Louise de Marillac, to whom the world owes the innovation which she and her co-laborer, St. Vincent de Paul, brought into being - a religious community bound by rules and vows, but uncloistered, so that they might be at liberty to serve the poor in their homes, while serving God in a life consecrated to Him.

Unlike St. Vincent, who was of humble origin, St. Louise de Marillac was born in 1598 and grew up in an illustrious French family.  Like St. Vincent, however, she was to attain to sainthood through trials, difficulties, and suffering. At the age of 22, she married Antoine Le Gras, Secretary to the Queen Regent, Marie de Medicis.  Toward the end of the year, a son was born to them and to him she gave all of a mother's love, not foreseeing, at this time, the cause of worry he would be to her in the future.  Although she performed with ease and charm of the duties of her position, she never cared for the life of society.  A few years later, Antoine Le Gras fell ill and died, leaving her a widow at age 34 with a son just 13 years old.
Whether it was to St. Vincent or to St. Louise that the idea first came of training country girls is of little consequence, but both found in these simple village girls willing hearts and ready hands that worked without fatigue.  St. Louise devoted more and more time to these young girls; she felt that nothing was of greater importance than to educate the minds and hearts of these young women who had heeded a call that could come only from God to serve the poor and the outcast.  She prepared them to teach, to carry out the nursing practices in vogue at the time, and to serve in every field of social work. Eventually the young women working with St. Louise joined her in living a community life, under rules and vows like Religious, and dedicated to charitable works.  The Archbishop of Paris gave complete approbation to the Rules, on which St. Vincent and St. Louise were collaborators, but of which she contributed the major part.  Thus, in time, St. Louise fulfilled her mission as Foundress, and the Little Company of Daughters of Charity, Servants of the Sick Poor, was officially established in the Church on November 29, 1633.

Louise de Marillac was beatified by Pope Benedict XV in 1920 and, in 1934, she was canonized by Pope Pius XI.  To this day, her remains are enshrined in the chapel of the motherhouse of the Daughters of Charity in Paris. She was declared Patroness of Christian Social Workers by Pope John XXIII in 1960. As a wife, mother, teacher, nurse, social worker and religious foundress, she stands as a model for all women.